As  I was walking to my vegetable garden which is approximately 150’ from my house,  I noticed this unusual bird on top of my paired bluebird box. That certain paired box is on a pole with horizontal steel channels and the boxes are 30 inches apart. I have been experimenting with paired boxes and most of them are  10 - 14 ft. apart.

At the end of May, I noticed some pine needles in the bottom of one of the paired boxes. I was excited because I figured it was a bluebird starting a second nesting.  I did not have a first  nest in that box. Each evening after work I would check the box and began
noticing something unusual about the nest.  On top of the pine needles were some small feathers and a small piece of snake’s skin.  I first suspected a tufted titmouse and was waiting to see what kind ofbird was visiting the box.

When  I finally saw the birds enter the box, I was very surprised at what I saw. When I caught my first glimpse of them, I realized they were definitely a different kind of cavity nester using the box.   It was a Great Crested Flycatcher.   I have never seen a GCFC and referred to my bird guide book to identify the bird.  I did some research on this species and realized that most of the time they require a larger box and
entrance hole.  The hole in the box that they chose had been “enlarged” by a woodpecker and measured at the widest point 1 5/8 inches. It is a solid cedar box and the floor measures 4 inches X 4 1/4 inches

While they were building the nest, there was some real competition between the GCFC and Tree Swallows. The TS were  being very aggressive and it looked like they were winning the battle that was going on between them. As I  continued to watch this go on, I realized I needed to interfere or I was going to have the TS take over the box and lose the GCFC   I took the one paired box that was not being used and moved it approx. 30 feet away from the GCFC box. The TS claimed that box and left the GCFC alone.

The nest was made up of mostly pine needles with a small piece of a snake skin weaved into the nest. (might be a trick to discourage predators) There were also some feathers on top of the nest.

On June 31 there were 3 eggs in the nest. The eggs are larger than a House sparrow egg, yet in a way they do resemble the HOSP egg.  They are moderately glossy, ivory / cream / pink, and densely streaked with fine purple, gray, red, brown, or olive  markings, often concentrated on the larger end of the egg.

These are a very “secretive bird” and would fly away as soon as I got close to the box.  With my vegetable garden
right next to the box, I was afraid I might spook the birds. But the more that I was around them, the more they tolerated my
presence.

The Flycatcher is olive brown with a pale gray chest and a yellow belly.
It has a white eye ring and two whitish wing bars. The wings and tail are cinnamon. It measures 7-9 inches long with a wing
span of 12.75 to 14 inches.  Male and female have similar plumage. Their sound is a loud squawking “wheep” or
“phree-e-e-e-e-ep” call usually from high in a treetop.

I monitor approximately 100 bluebird boxes and to have this nest in my back yard was SO exciting. When I told folks
about this nest there were questions and some doubt.  Are you SURE it is a GCFC? Several folks stopped by the house to check out the
box. I made a ”blind” approximately 30 feet from the box and got some really good photos of the birds, and photos of insects they were feeding.  As far as I know, with the research that I did, there are no records of any GCFC using a nest box in Pennsylvania.

Watching  them feed the young was also very exciting.  Their diet consists of many different
items.  It has been said the GCFC species perform a natural pest control service. They consume more that 50 kinds of
beetles, along with wasps, bees, mosquitoes, grasshoppers, crickets, katydids, moths, caterpillars, cicadas, and other insects.  Their diet also consists of various berries such as mulberries, poke berries, blackberries, wild grapes and others.

I tried to limit my monitoring of the box due to the fact that I did not know how tolerant of humans these birds were. I was never “dive-bombed” or harassed by them when monitoring the box.  As the chicks got older the parents would scold me from high in the trees with
their squawking “whreep” call.

A day before the chicks fledged, something very interesting happened.  I was watching the nest box from my kitchen window with binoculars and witnessed one of the chicks come completely out of the box, hung onto the front and then re-entered the box.  For
most of my bluebird boxes I cut four saw kerfs on the inside and OUTSIDE the  entrance hole.  Although the kerfs are not necessary on the outside of bluebird boxes, I always cut them on all my boxes. I believe it makes it easier for Ma and Pa to feed the chicks. The kerfs
on the outside of this box definitely helped this little chick re-enter the box.  I continued to watch, hoping to see them fledge, but they did not fledge until the following day, which missed.

Data  recorded was:
Nest  building started approximately May 21
Three eggs were laid as of May 31.
Three chicks fledged on June 29.
Upon examination of the nest after they fledged, it looked very much like a bluebird nest after fledging. It consisted of matted down pine needles and the feathers that were there after the egg laying were gone.

Per Jason Martin with Cornell (Nest Watch) he thought this was probably a young GCFC couple.  He also was not aware of
any GCFC using a nest box in PA. An interesting item he said was that these birds will often return to the same nesting site year after year.  How “lucky” would I be if this special nesting would happen again!

As I reflect on this nesting experience I cannot help but think about how similar these eggs resembled the dreaded House sparrow egg.
Wondering how many folks would see this nest and eggs and suspect they were HOSP eggs and toss them out.  As a precaution, always make sure that we correctly identify the eggs and the species using the nest box before we toss any eggs out.

So what is next??? Do we build larger cavity nesting boxes with a larger hole and try to attract these birds??  I do plan to build a box to encourage them to return next year. Recommended size is a 6-7 inch square floor. 12-18 inches deep with an entrance hole of at least 1 3/4 inches.   Mounting height is 6-24 feet. Per Bet Zimmerman’s bluebird web site, http://www.sialis.org  Phil Berry in Florida has had a number of GCFC nest in boxes with a 1 ½ inch hole.

Unfortunately, Breeding Bird Survey and Christmas Count Census date show that populations of these birds are in decline.  Being
cavity- nesters, they must compete with Starlings and Flickers and other cavity nesters for breeding sites.  Proper placement of nest boxes will likely help these birds recover to previous population levels as long as Starlings and Flickers do not take them over. 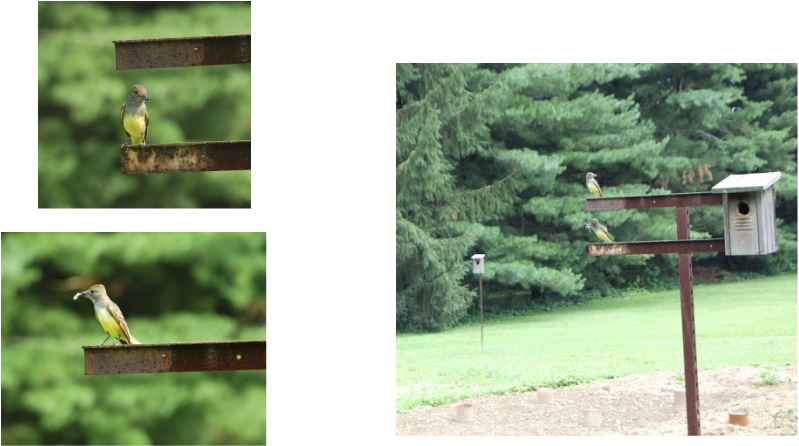