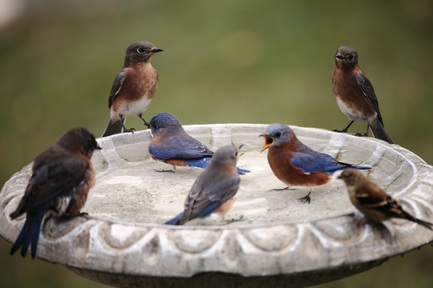 Click to Enlarge
Enter your caption by sending it to the Webmaster using the form below.   Contest is open to the Public

The Winning Caption will be posted under the photo and receive Eastern Bluebirds Note Cards. see below;


Photo sent in by Michelle Holt      From Chester County, Pa.

What are the bluebirds saying to one another?
The Winner of the Photo Caption Contest Is >  Irene Gaydos from Montour County.
Entry #7. "...and now for our next contestant in the 'Singing Circle' competition." Submitted by Irene Gaydos
Congratulation Irene and thank you for playing the photo caption contest. And thanks to all who submitted an entry.

click to enlarge
The winning caption will receive these folded blank note cards 4 1/4" x 5 1/2" with envelopes, set of 8.
Hand-painted picture of a pair of Eastern Bluebirds at Nest Box.

How to Share your Photos;
Send by email with attachments of your favorite bird photo (s) to;   jmsbsp@comcast.net   Subject Line -  Photo Caption Contest.  Your photo or photos will become public property when placed on the Bluebird Society of Pennsylvania Website and you agree to release all claims and rights of photos being used on this site. JPEG attachment are preferred. Name of Photographer - County and State are required for posting.
http://www.google.com/analytics/