Some Basic Facts About Bluebirds 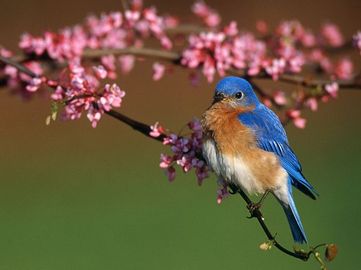 Adult Male Eastern Bluebird
Species: Sialia sialis,  Diet: Omnivore,  Average life span in the wild: 6 to 10 years, Size:6.5 to 8.5 in (16.5 to 19 cm)  Weight:0.84 to 1.09 oz (24 to 31 g)  There are three species of these colorful North American birds. Eastern and Western bluebirds have a reddish brown breast, which contrasts with their predominately blue plumage. Their relative, the (male) Mountain bluebird is entirely blue.

The Eastern Bluebird pictured here are primarily found east of the Rockies, and range from Canada to Mexico and Honduras. They are much admired for their lovely coloring and for a distinctive song that many hear as "chur-lee, chur-lee." The eastern bluebird is the state bird of both New York and Missouri.


Western bluebirds are found west of the Rocky Mountains from Canada to Mexico.
The Mountain bluebird also inhabits much of western North America and nest as far as Canada and Alaska often at elevations above 7,000 feet (2,133 meters).
Bluebirds eat small fruits and hunt insects, The birds perch, watch, and then swoop to the ground to pounce on their prey. One of their favorite foods are meal-worms, actuality larva from a dark-ling beetles. You can purchase this and many other insect products through your neighboring stores and online stores.
Pairs mate in spring and summer, when they construct small, bowl-shaped nests in cavities or nest boxes. Females lay one egg per day (mid morning) and up to four to five eggs, (at times six eggs,) only 3.5 percent of eastern bluebirds clutches contains six or more eggs according to data from Cornell's Birdhouse Network. and they incubate them for about two weeks. Among bluebirds, unhatched or infertile eggs occur in approximately 10 to 15 percent of nest, noted from The Bluebird Network for Cornell Lab of Ornithology. Color of the eggs are generally Lt.blue but at times off-white (called albanistic eggs) you're nest will contain all blue or all off-white eggs never a mixture of both. Young remain in the nest, cared for by both parents, for an additional 15 to 20 days. Bluebirds often have two broods in a season, weather permitting sometimes three. Sometimes, a young bluebird from the first brood will assist its parents in caring for the second brood. Brooding is done by the female that has a brood patch under her abdomen where blood vessels are near the surface of the skin. She can heat the eggs up to 99 to 100 degrees. Her body temperature is 105 degress. Bluebirds are termed in the early stages as Hatchlings - day old or just born, Nestlings- in the nest until 18 to 22 days, Fledgling -a bird outside the nest but still dependent on the parents care. Juvenile - feeding on its own after 3 or 4 weeks. Adult - after their first molt, generally near the end of the season.
Bluebirds living in higher latitudes may head south if food becomes scarce or temperatures too cold. Mountain bluebirds typically migrate to lower elevations during the same lean seasons.Eastern Bluebirds have been know to stay all winter long where there is plenty of food to be found.
Bluebirds are considered fairly common, but their numbers have declined substantially during the last century. Populations have been given a boost by the birdhouse boxes that have become popular in many parks and backyards.