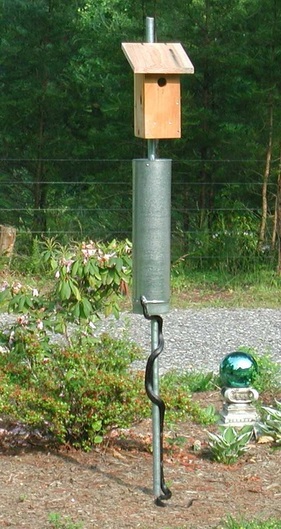 Please Install Predator Guards
How to monitor your bluebird nest box
Monitoring a bluebird nest box can be a quick process and doesn’t need to take longer than a minute or two. It’s imperative that you check on your nest box as least once a week to monitor the progress of your bluebird nest and address any problems. It’s important to remember that bluebirds are very accepting of human interaction and will never abandon a nest because of monitoring.  However, it’s usually best to monitor a nest when the adult male and female are not inside.  If you’re not sure if a bluebird is not inside the nest box, you can make a whistle or call to alert them to your presence. There are two primary functions of monitoring:  checking for problems and hazards and recording the progress of your bluebird nest.  For this reason, you’ll want to have a log form to record things such as when bluebirds arrive, started building a nest, lay their eggs, how many eggs, hatch, how many fledged, predator problems and etc. You can download the necessary forms from this website. These forms are easy to use and are self explanatory. Your recorded information is very useful to the Bluebird Society of Pennsylvania.

Monitoring in early spring
In the onset of spring, before bluebirds arrive, you want to check and make sure your bluebird nest box is ready for the upcoming breeding season. Look for holes, cracks or other damage.  It’s also a good idea to make sure that the size of the entrance hasn't been altered by other birds. Also make sure that wasps haven’t built a nest on the ceiling of your nest box, as their presence will prevent bluebirds from nesting. Lastly, install a predator guard shown here to prevent climbing predators such as raccoon's and snakes.

Bluebird courtship and nest building
Male bluebirds will arrive before females to establish territory.  Their arrival dates depends on geography, as bluebirds arrive at warmer destinations earlier, but the general range is between mid-February and March in Pennsylvania. Once the male arrives, he will attempt to attract the female through a courtship songs, flight such as wing waving. This will often occur around the nest box.  If the female likes the male and the nest box, she will begin building the nest immediately.  Nest construction takes on average 4-5 days.

Monitoring egg laying
Eggs are laid in the morning, between 7:00 a.m. and 11:00 A.M., and you should avoid monitoring around this time. The female will lay an egg a day, sometimes missing a day if it’s cold or rainy.  The number of eggs laid varies by bluebird species, but will usually be no more than eight and generally 4-6.  The female will spend time away from the nest during the egg laying period, but if you do open the nest box while she is there, simply close the door gently and come back another time. Preferably the afternoon time may be a better time.

Monitoring Incubation
The female will not begin incubation until she has laid her last egg, after which the incubation period will last approximately 14 days.  During this period, you should allow the female privacy. If it is a rainy season you may want to check the nest to see if it is dry. A wet nest poses danger to the eggs not hatching or the chicks perishing due to hypothermia. Here is when a Monitor comes in handy to replace the grass nest with a dry one. Carefully replace the eggs or nestlings into your dry cup nest and place into the nest box. Congratulations; you just saved bluebirds from perishing.

Nestlings
During the first few days after young birds are hatched, the father brings them food, while the mother continues to remain on top of the nest to keep the nestlings warm; this is called brooding.  You may notice the adults departing the nest with a white blob in their bills.  These are fecal sacs, which the adults remove from the nest to keep it clean. During the nestling stage, the most important function of monitoring is to ensure that the nestlings aren't attacked by predators. House sparrows, raccoons, cats and even snakes will all prey on newly-born bluebirds.This is why it is so important to make use of predator guards.If you find an injured bluebird, or a bluebird that needs assistance you can take it to the nearest wildlife rehabilitation clinic found on this website. After approximately 20 days, the nestlings will become fledglings and leave the nest. If you make it to this stage, you will have successfully raised a new brood of bluebirds! Congratulations!! You are now a successful landlord Monitor to these once threaten species.

Monitoring Nest Box Report Forms
Nest Box report forms are available at top of this page (State Monitors Nest Box Reports)  - a drop down list will appear and click on download weekly and annual nest box report forms. Whether you have one or many nest boxes the Bluebird Society of Pennsylvania would appreciate receiving your report.
http://www.google.com/analytics/